Cristalie’s son Gut Neuenhof’s Columbo (by Cornet Obolensky) was already winning tests for young show jumpers up to medium (M) level when he was five years old and was Vice Westphalia Champion. 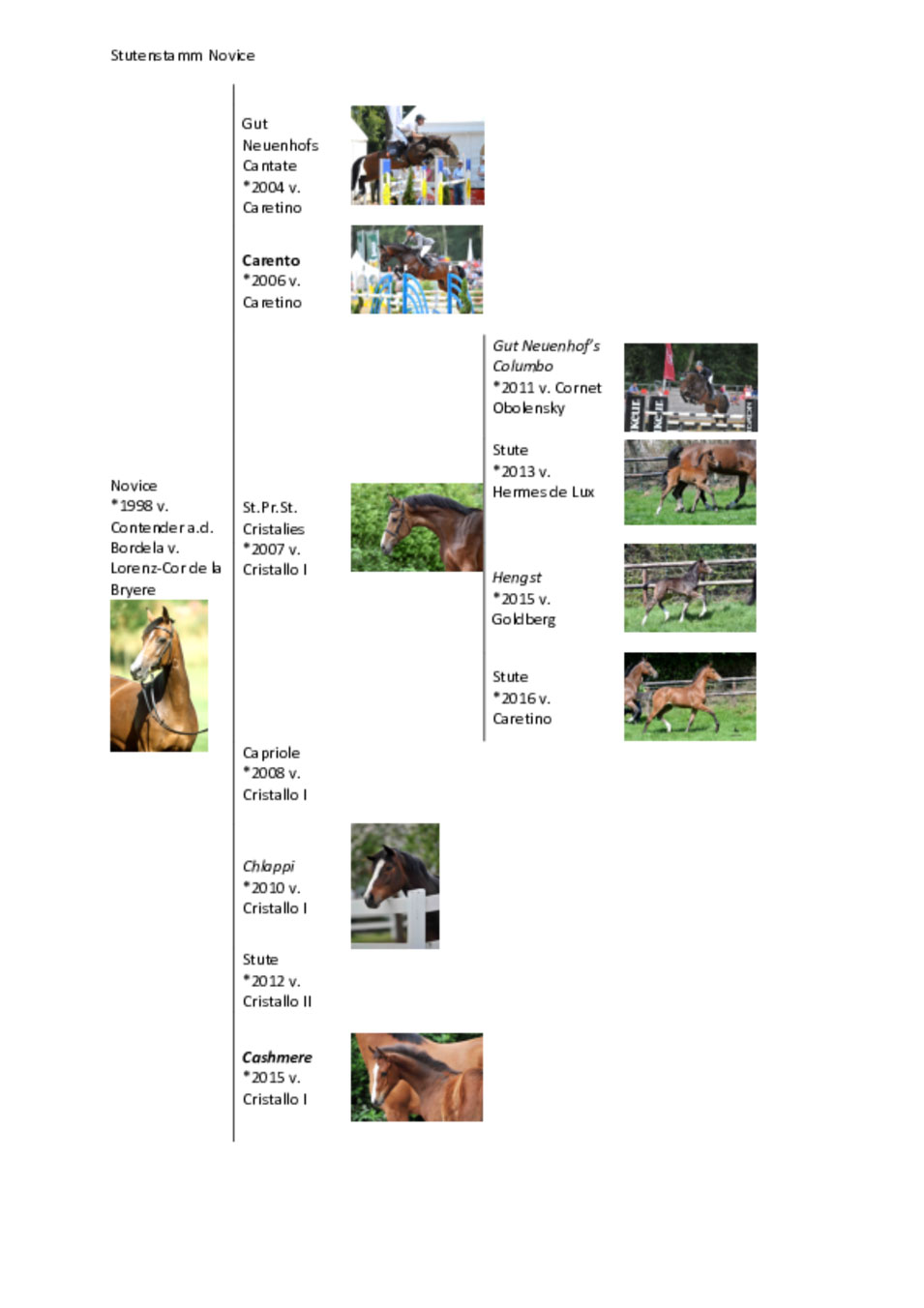 Cristalies completed the third best mare performance test in Westphalia in 2010 with an overall score of 8.58. She placed fifth in the final ring of the Westphalian Elite Mare Show and was awarded the title of "Best Jumper Mare".

Sire is our stallion Cristallo I, who has made a name for himself as a proven double sire. He himself placed second in the Westphalia Crest, then placed twice in the show jumping Bundeschampionat finals and was successful internationally in the advanced level from the age of seven. Unfortunately, he cannot continue his career due to injury. So far, eight of his sons have been licensed, 17 of his daughters have received the State Premium and more than 30 of his offspring are also successful in advanced level show jumping competitions. His daughter Cara Mia Rcf took part in the World Championships for Young Dressage Horses in 2016.

The dam Novice also produced the licensed stallion Carento (by Caretino), who was successful at the Bundeschampionat, and his full sister, the Bundeschampionat fifth placed Gut Neuenhof’s Cantate/Henrik von Eckermann. She was bred to Cristallo I and became the dam of Capriole, who placed in advanced (S*) level show jumping competitions.

The dam’s sire Contender is one of the most influential stallions in Holstein breeding with almost 130 licensed sons. His sporting offspring, including Checkmate/Meredtih Michaels-Beerbaum, Chiara/Ludger Beerbaum and the double European Champion Montender/Marco Kutscher, earned over 9.3 million Euros in the show jumping ring.

The great-granddam Ordela produced, among others, the advanced (S) level show jumpers Cordela (by Silvester), Lady Orion (by Lavall II) and Landlord (by Landgraf I).

Numerous other advanced (S) level show jumpers come from the Holstein mare line 1094 as well as the stallions Cornet de Lux (by Cornet Obolensky), Pikeur Quick Fire (by Quintero) and Lacado (by Lacapo).